Fashion Trends 4 Celebrity Brides of 2018 Who Looked Stunning On Their D-Day!

We are not even half way through the year and there have already been half a dozen weddings in the film industry. There is extra excitement when actresses get hitched because there is a lot of style, fashion and fun that can be seen and imitated. Often actresses’ weddings become a fashion menu where the common people get their inspirations from. People are interested in knowing what the Indian celebrity brides wore and who did their makeup.

When a fashionista gets married, the entire fashion world is watching closely. Sonam chose a white and coral colored Anuradha Vakil outfit for the mehendi. As it was a very casual event, her outfit wasn’t over the top. 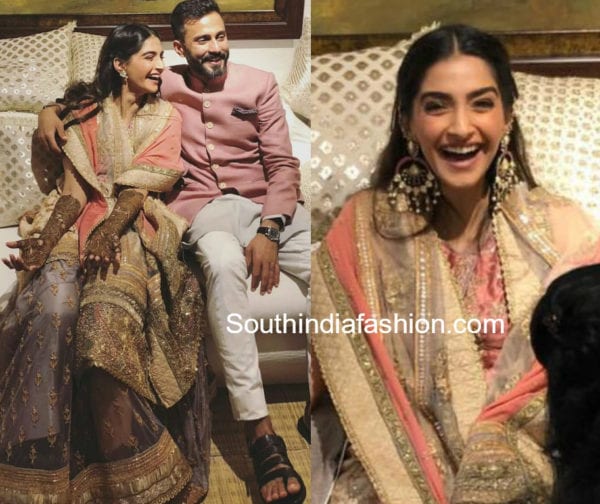 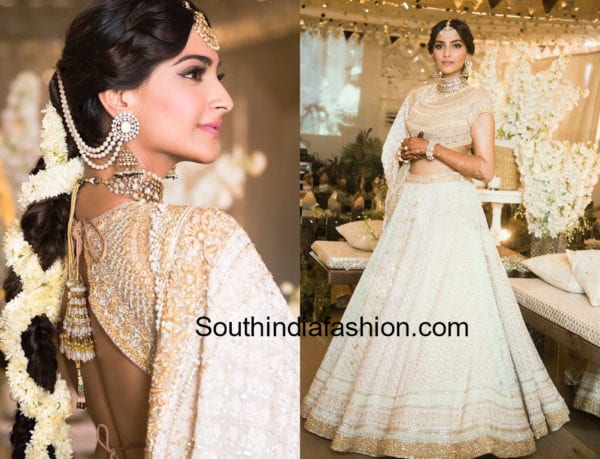 On the wedding day, Sonam was seen in a flattering red colored Anuradha Vakil lehenga. There were lots of golden embellishments to give a rich look. Large pieces of traditional jewelry, red bangles and bridal makeup made Sonam the most beautiful bride of the year. 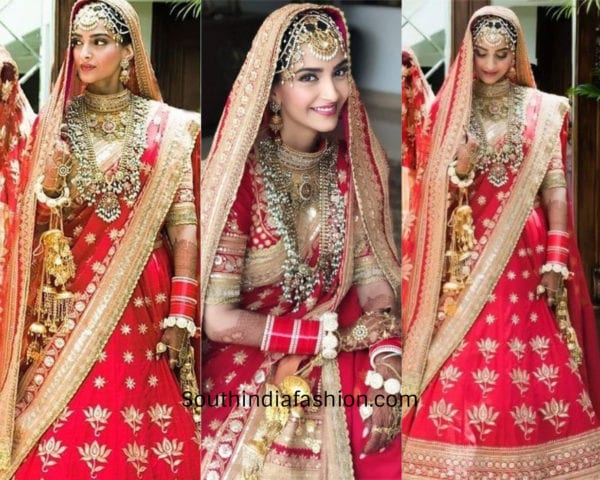 For the reception, Sonam opted for a rather unique look. She wore a trendy grey and white Anamika Khanna outfit. It was simple and non-ornamented. Straight hair, dark lips, dramatic eyes and a layered necklace were all that were needed to nail the casual bridal look. This was one cool bride.

While everyone was busy with Sonam’s wedding, Neha Dhupia gave a shocker. She tied the knot with her best friend Angad Bedi. As the pictures appeared on the social media, people could not help but drool over the beautiful bride. We never thought Neha could look so blushed and quixotic. She wore a resplendent pastel pink colored lehenga by Anita Dongre. It had embroidery in shades of coral pink. A huge necklace, traditional red chuda, large jhumkas and a prominent maang tikka completed her bridal look. 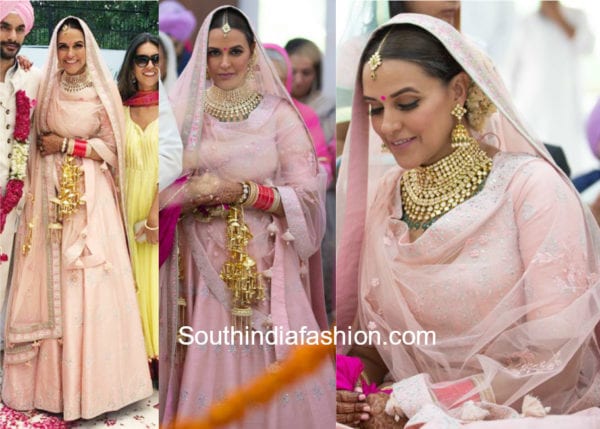 For the mehendi, Neha wore a simple outfit by Masaba Gupta’s label, House of Masaba. The blue colored kaftan had golden fish-print all over. It gave a carefree vibe. 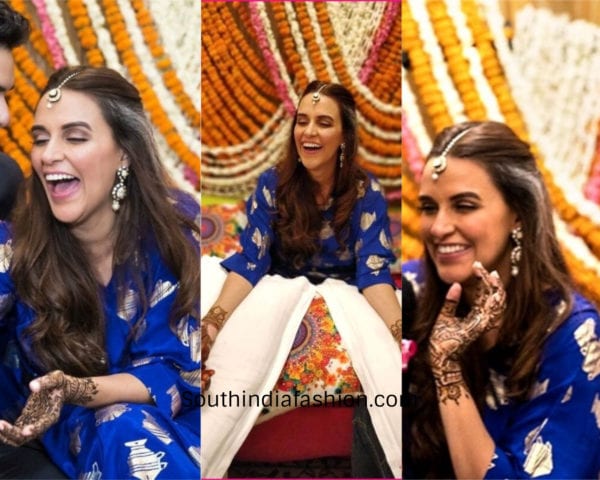 Popular Malayalam actress Bhavana entered marital life with her producer boyfriend Naveen early this year. The actress married in the traditional Kerala way at a temple. She was seen in a beautiful gold kanjeevaram saree. The saree had handwork embroidery all over it. The blouse had the embroidery of Radha and Krishna. Heavy temple jewelry and subtle bridal makeup were enough to make Bhavana resemble a goddess. 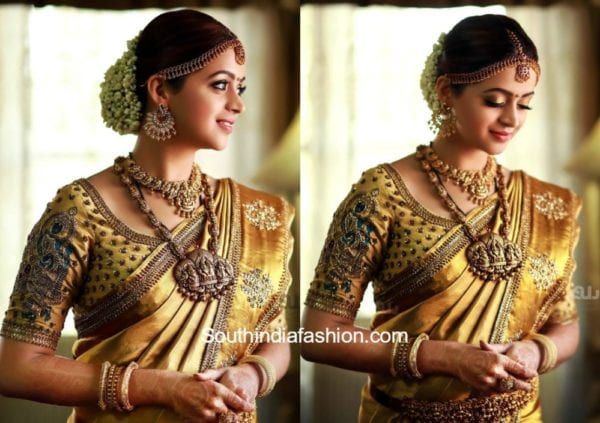 For the wedding reception, Bhavana wore a rose gold lehenga from Label’M. Classic heirloom jewelry, smoky eyes and nude lips completed the look. The actress known for her simplicity was seen wearing a simple mustard colored flowing maxi dress for her mehendi ceremony. 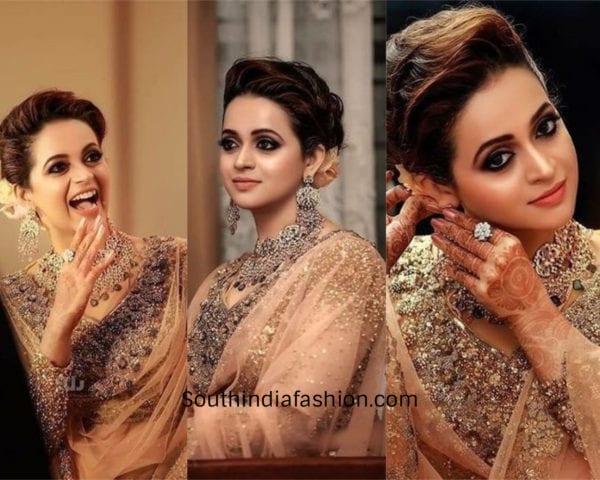 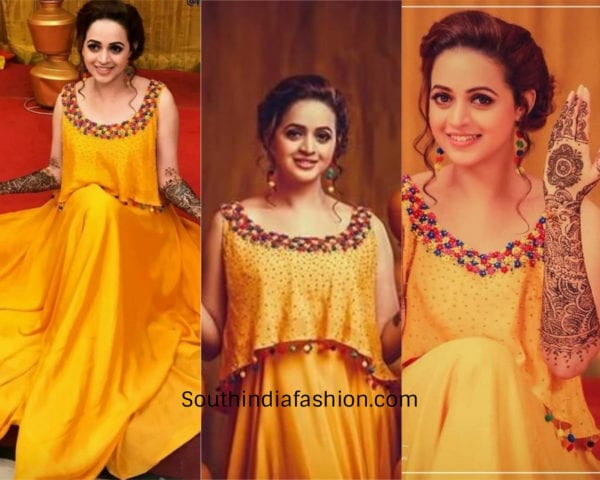 The multilingual star tied the knot with her Russian boyfriend Andrei Koscheev in March. Shriya kept it simple with a traditional pink brocade silk saree for the wedding. Heavy duty jewelry was what made her look like a bride. For the Udaipur wedding, Shriya chose a red lehenga with same kind of jewelry. For her haldi, we see the cheerful bride wearing a yellow lehenga. Though there are no good pictures and further details about her outfits, we believe Shriya made a beautiful bride. 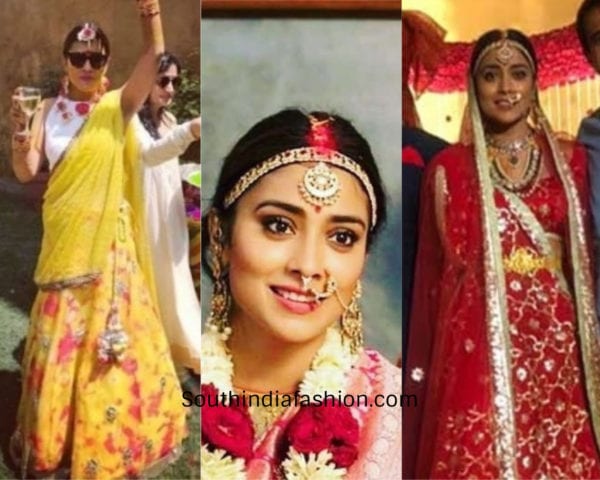 This is how the celebrity brides were dressed for their wedding. 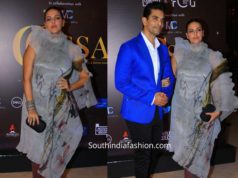 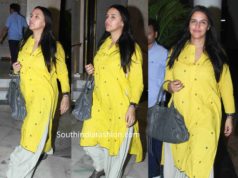 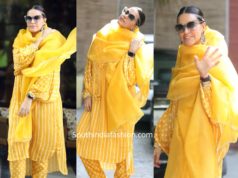 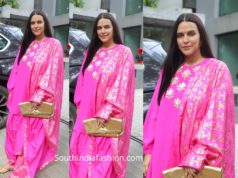 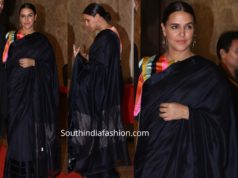 Neha Dhupia in a black saree

All About Paithani Sarees And Where To Buy An Authentic One!

Katrina Kaif’s Style Diary Proves That She Is A Huge Fan...

Beat The Monsoon Humidity With Your Favorite Cotton And Linen Sarees...

Anasuya in a floral print saree

All About Paithani Sarees And Where To Buy An Authentic One!

Beat The Monsoon Humidity With Your Favorite Cotton And Linen Sarees...

Katrina Kaif’s Style Diary Proves That She Is A Huge Fan...

7 Ways To Add Vibrant Phulkari Embroidery In Your Wardrobe!

Celebrity Inspired Hair Braids That Are Perfect For A Bad Hair...