Fashion Trends Rakul Preet Singh – The Fashionista Of The Tollywood

Rakul Preet Singh is the new name in the Telugu Film Industry that’s been on these days. The actress did her debut movie in Telugu opposite Sandeep Kishan in “Venkatadri Express” which earned a critical acclaim. She also did a Bollywood debut opposite Himansh Kohli in ‘Yaariyaan’. However, now she is a famous face in the south due to the hit movies like ‘Sarainodu’ and ‘Bruce lee’. She is a fashionista off screen and likes experimenting a lot. Here are a few looks of her which prove our point.

Rakul now works predominantly in Telugu film industry and she very well knows how to nail the classic Telugu girl look. She is seen wearing the pattu sarees often at many movie promotions and shopping mall openings. Well, as they say, ‘Be a Roman in Rome’, Rakul is rocking it. Now, if you think she can only do the traditional wear, just take a look at these pictures. She can style denim like a pro. She kept it low key, using tank tops with duster coats and simple tees, crop tops, and shirts to keep it both cool and casual. This lady is one fierce style icon when it comes to Red Carpet. Whenever she is seen on the red carpet of any award function, she is seen slaying it. Don’t believe us? Take a look at these pictures. She is always seen experimenting something new and she always receives a positive acclaim for her style and the way she carries herself on the red carpet. We all have to agree on that, don’t we? She is always seen proactively participating in the movie promotions and word has it that she never denies a selfie with a fan. She is just as stylish every time she is caught on camera. Be it the quirky donut two-piece dress, or the striped dress or the solid-colored midi, she presents herself with so much of confidence. Now let’s talk, Is she the fashionista of the Tollywood or no? 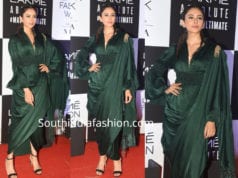 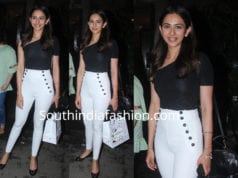 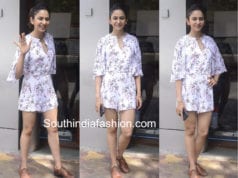 Rakul Preet beats the heat in a floral romper! 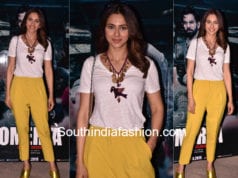 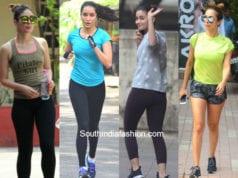 Pattu Lehengas And Half Saree That You Can Consider Picking For...

Shilpa Reddy in a traditional saree

Bridal Hairstyle: Bun or Open Hair – What To Pick When?

Bridal Hairstyle: Bun or Open Hair – What To Pick When?

Pattu Lehengas And Half Saree That You Can Consider Picking For...

Kajol’s 7 Saree Looks That Are Super Stylish And Elegant!