Rana Daggubati and Miheeka Bajaj’s Wedding brought exuberance to our monotonous lives becoming the only good thing to come out of 2020 so far. The couple decided to tie the knot when the Baahubali star popped the question back in May 2020 after dating for almost 2 years. 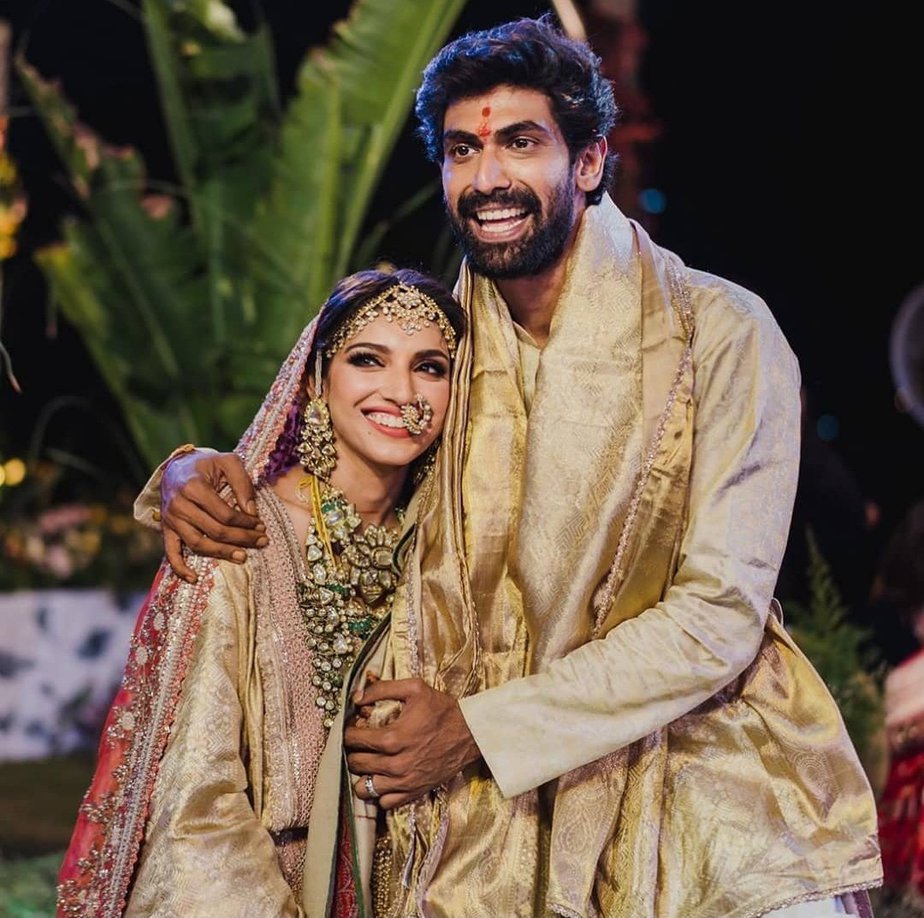 Meehika is an interior designer and runs her own event management company along with her mother, Bunty Bajaj also the director of Krsala Jewels. From wedding décor to bridal trousseau, the dynamic mother-daughter duo planned and finalized everything online due to the pandemic. While the news about the most eligible bachelor getting married left us all heart broken, Miheeka’s wedding trousseau lifted us up with some never-seen-before outfits and jewellery styling. She not only left us mesmerized but also gave us some major wedding inspo. 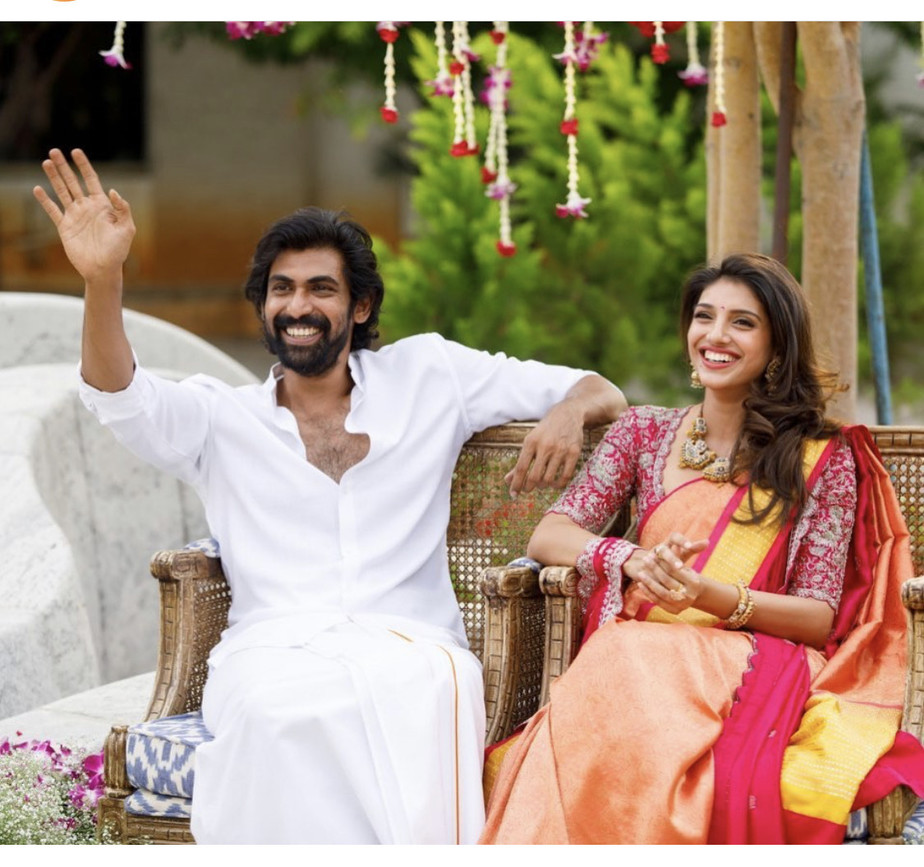 The images of Rana and Miheeka’s intimate Roka ceremony appeared on 22nd May 2020. The couple decided to make it official in presence of only immediate family members due to social distancing mandates at Ramanaidu Film Studios, Hyderabad. Rana decided to go ahead with a crisp white shirt and a traditional dhoti. Miheeka looked traditional yet chic in a peach Kanjeevaram saree with hints of yellow paired with a heavily-embroidered blouse by Jayanti Reddy. She also donned a pink dupatta on the side with the designer’s signature scalloped details. While the traditional jewellery ensemble comprised of a beautiful necklace, earrings and kada; the minimal makeup looked perfect with a pink bindi. 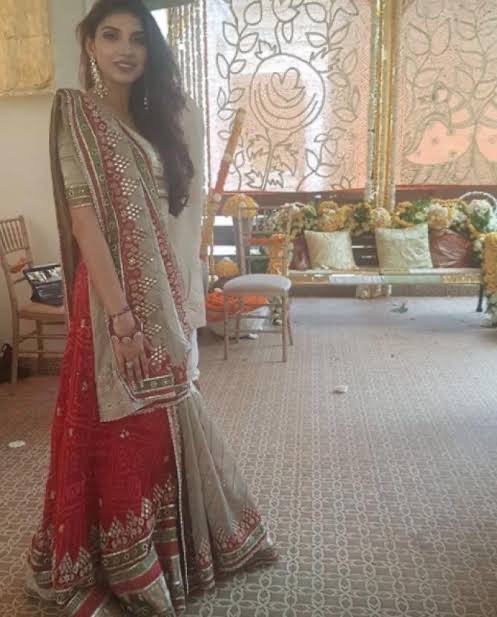 Miheeka gave a tribute to her mother by wearing her wedding lehenga for the Bhaat Nyotana ceremony, a Marwari ritual where the mother of the bride invites everyone in the family. The grey and red bandhini lehenga paired with studded dangling earrings with open hair perfectly complemented the outfit. Mindful of the coronavirus, Miheeka became the first celebrity bride to spot a mask with her outfit for Lagna Patrikalu. Mint green lehenga by designer Jayanti Reddy teamed with a jadau multi-layered necklace. The earrings, maang tikka and bracelet embedded with exquisite polkis and rubies made the bride look ethereal. 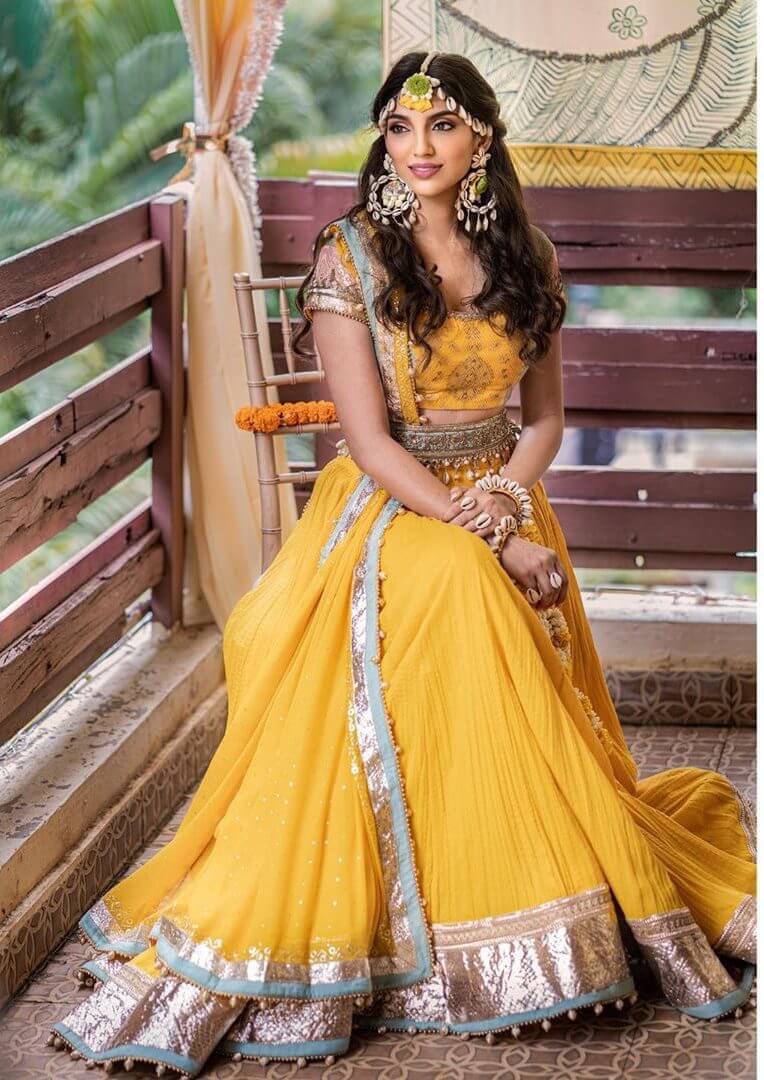 The Haldi ceremony did complete justice to its name with everything being so vibrant and colorful. The yellow and orange blooms all around and the amalgamation of gota and jute everywhere looked magnificent. Rana stuck to a white shirt and lungi combo but bride marked the occasion with a yellow lehenga by Anand Kabra. The cowrie shells added to the matha patti, chandelier earring, kadhas and kamarbandh rather than the usual flower ornaments. Future brides, take notes. 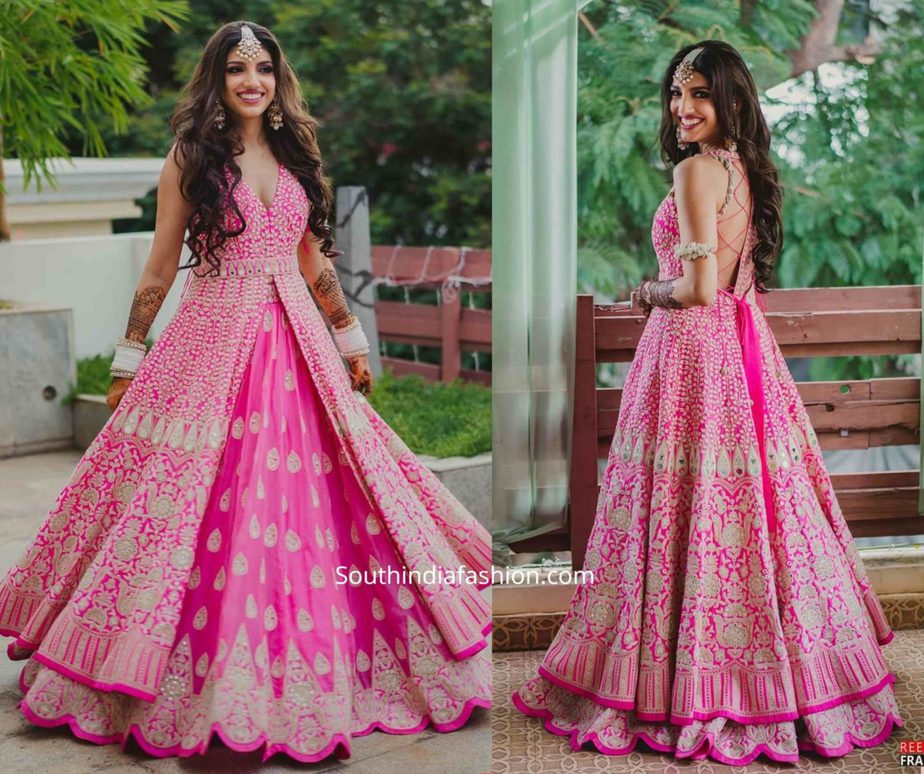 Miheeka pulled off a monotone look for the Mehandi festivities. She donned a fuschia pink hand embroidered jacket and lehenga set from Arpita Mehta while epitomizing timeless elegance with Russian emerald earrings along with polkis and pearls encrusted maang tikka. Her dark mane cascaded down the shoulders. Rana opted for a kurta combo with a bandhgala in cream colored tones designed by Kunal Rawal. 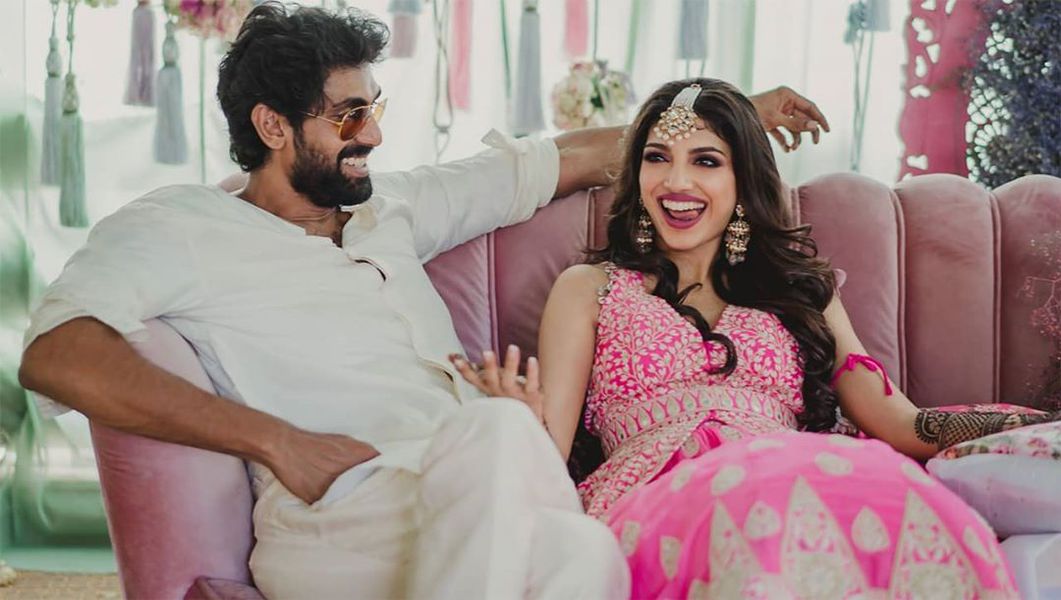 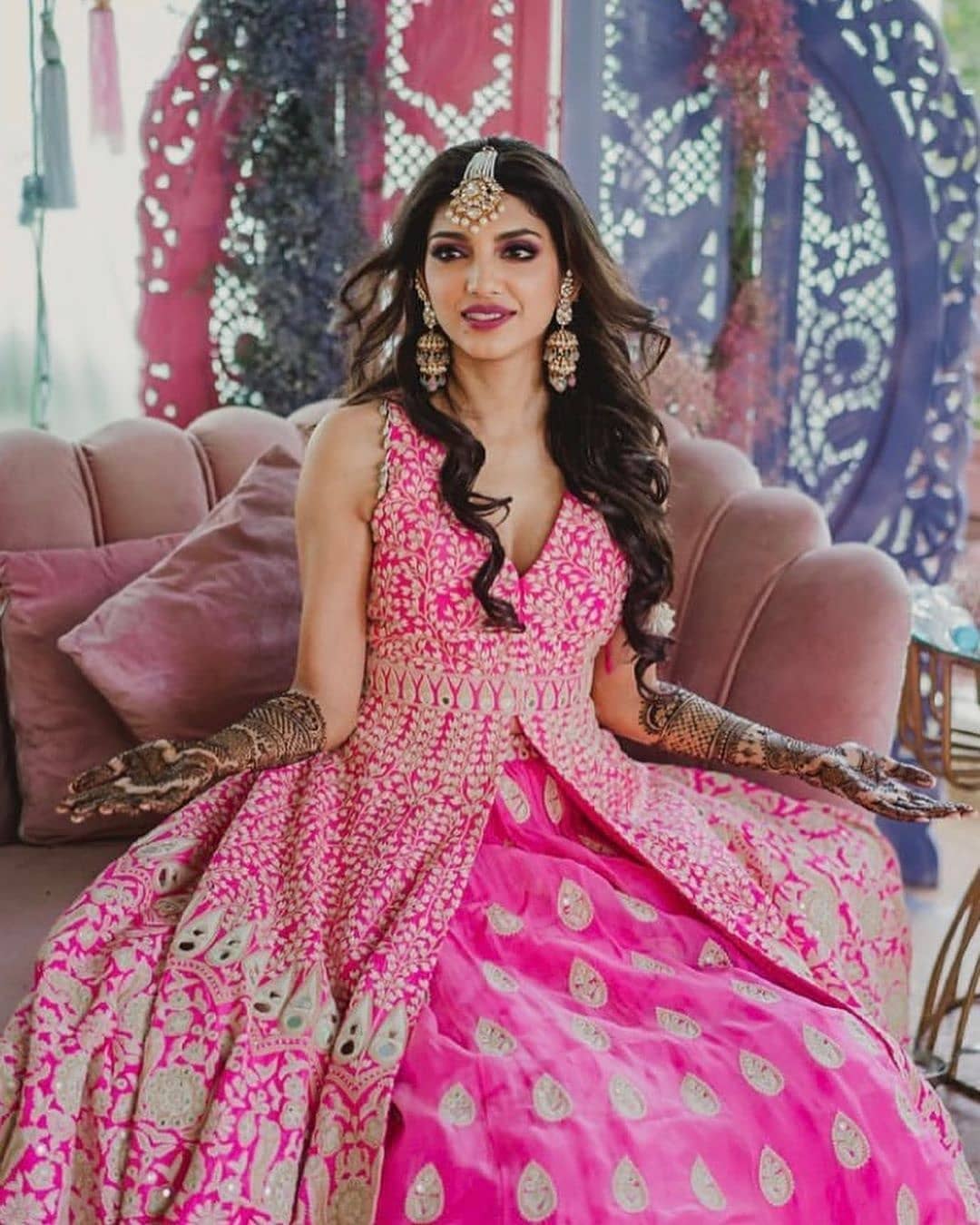 Let’s begin with the wedding décor set up at Ramanaidu Studios, Hyderabad. The décor came straight out of a Thota Vaikuntam painting, literally. The couple took inspiration from the painting gifted to them by the artist. Resulting in a riot of colors and fresh flowers, it was truly a recreation of the enchanted forest. 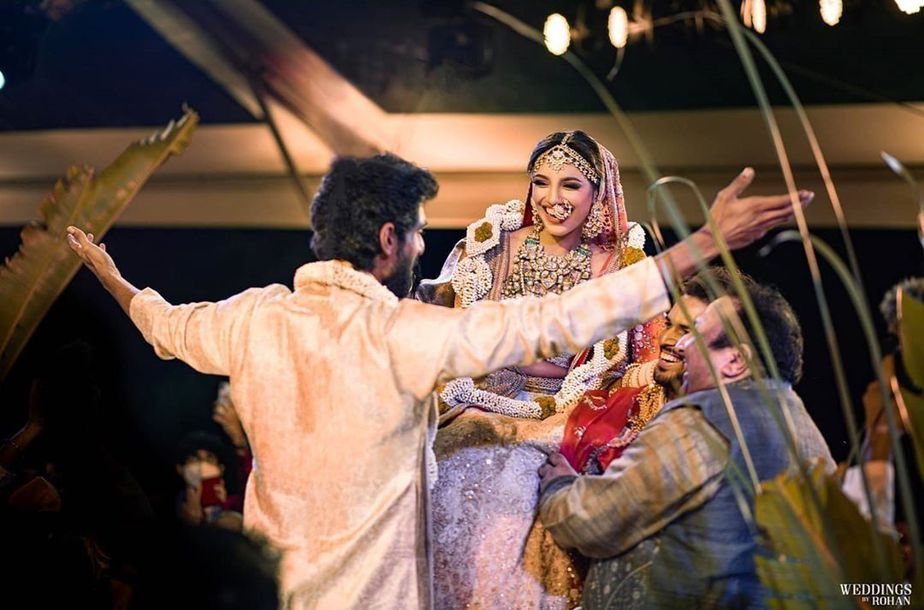 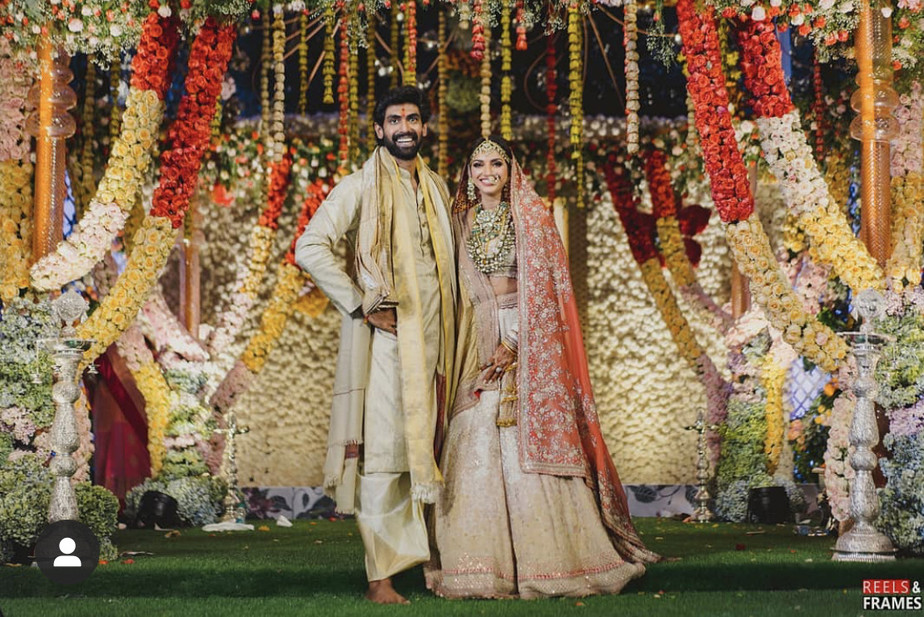 Rana and Miheeka’s wedding outfits: the perfect ivory, gold and zardozi affair. The groom looked dreamy in a pale gold dhoti-kurta set and the bride left us speechless. 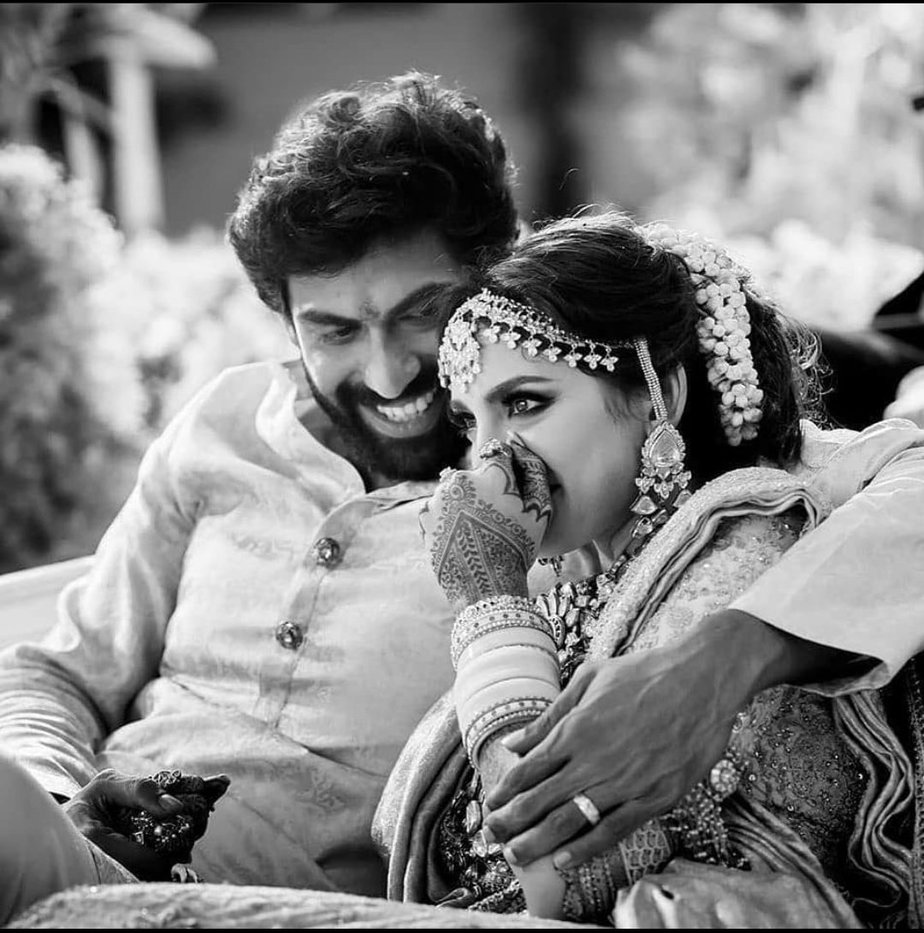 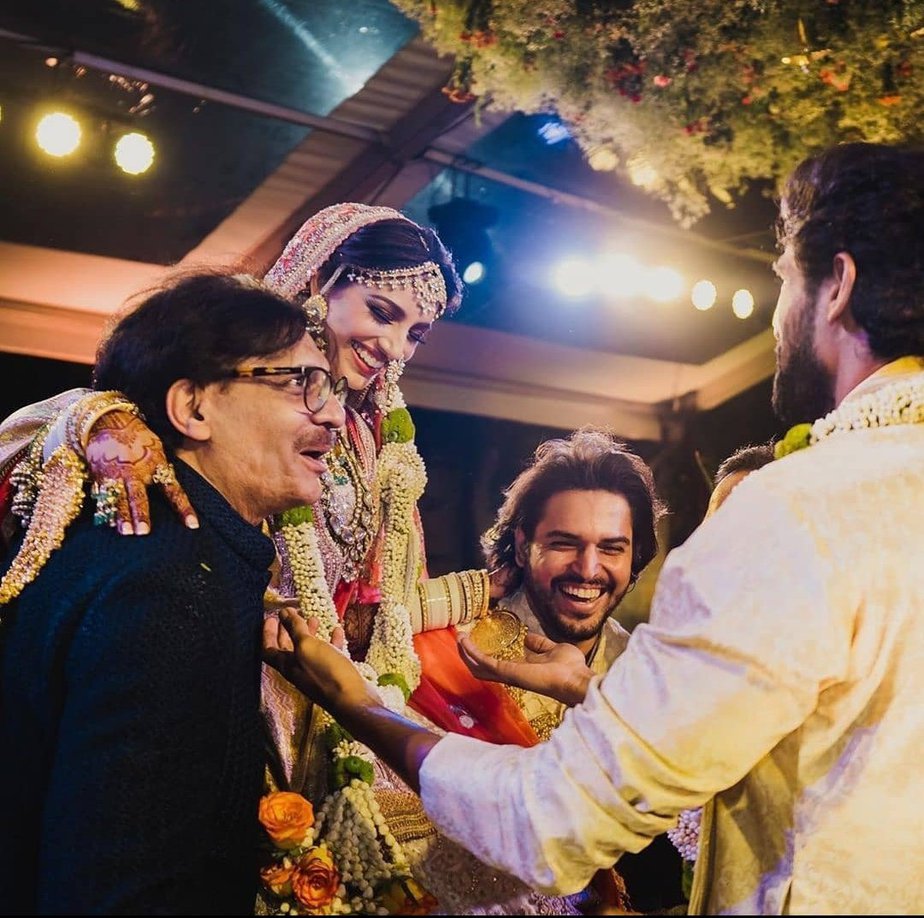 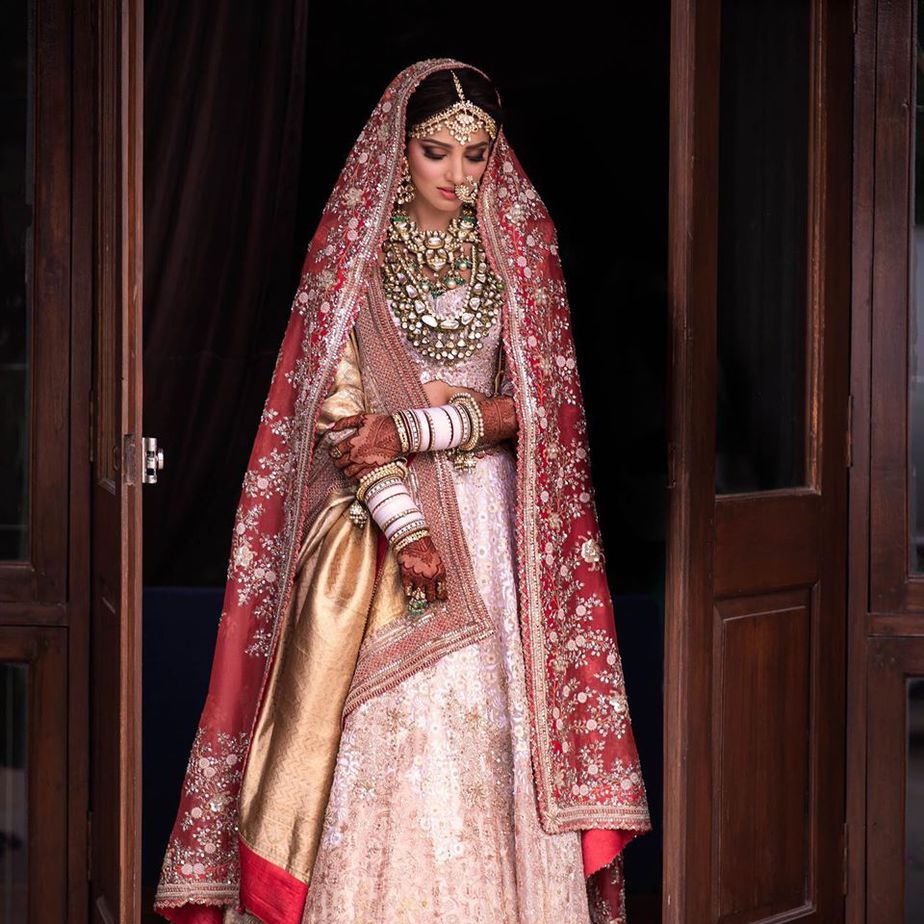 Coming from a family that owns a fine jewellery brand, Miheeka looked regal in her wedding jewellery. The necklace was made by assembling a number of different pieces with a lotus design at the center and took six months to craft according to the bride’s mother. The large polkis and emeralds encrusted in necklace, nose-pin, matha patti with white chooda and kalirey made it all the more beautiful. The bride did not forget to carry a part of her mother on the most special day of her life and wore rings and anklets from her mother’s wedding day. 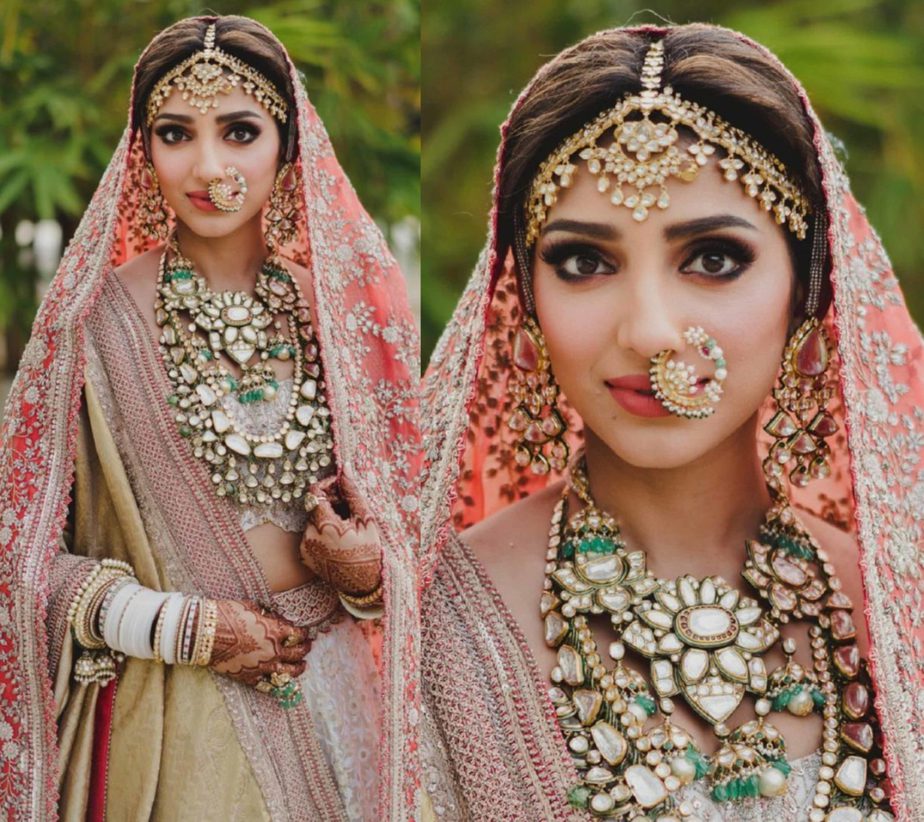 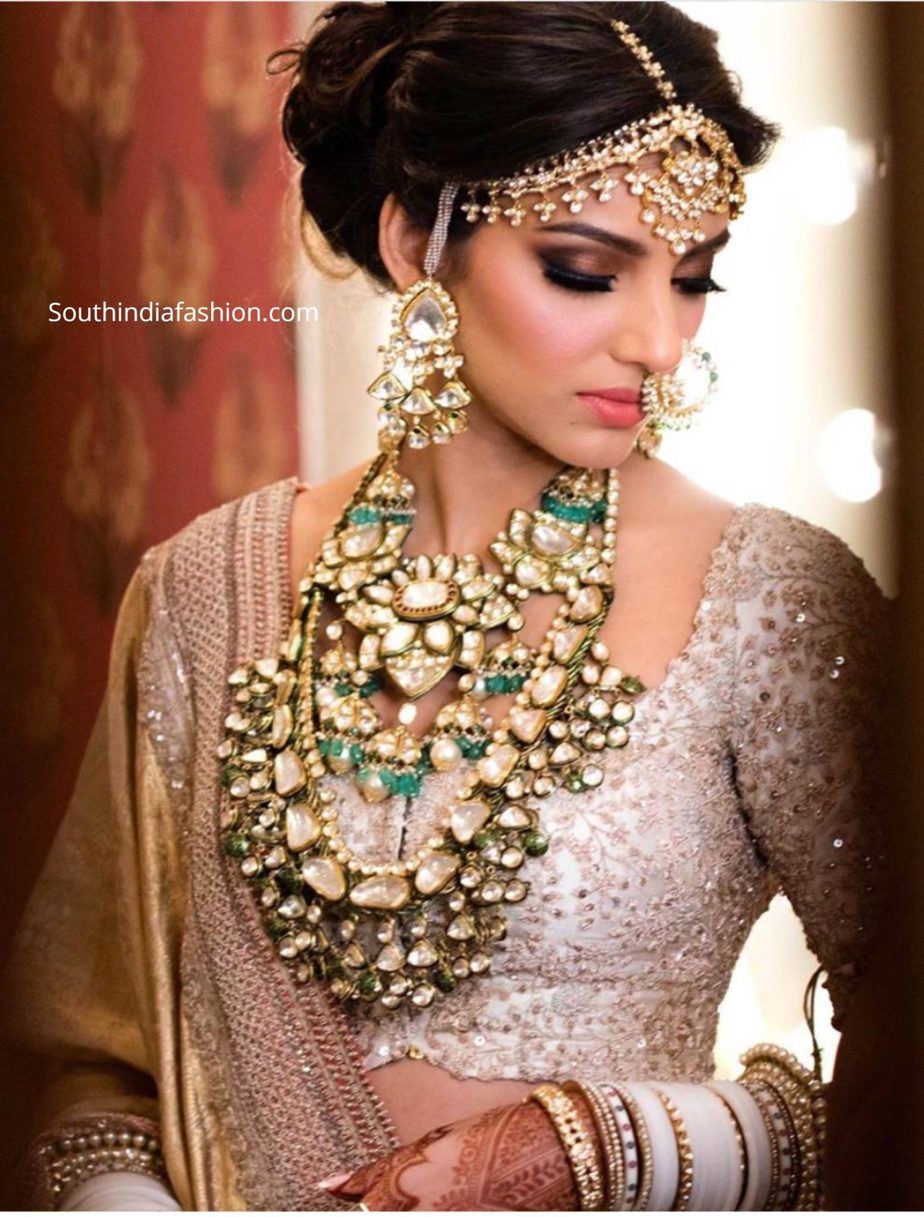 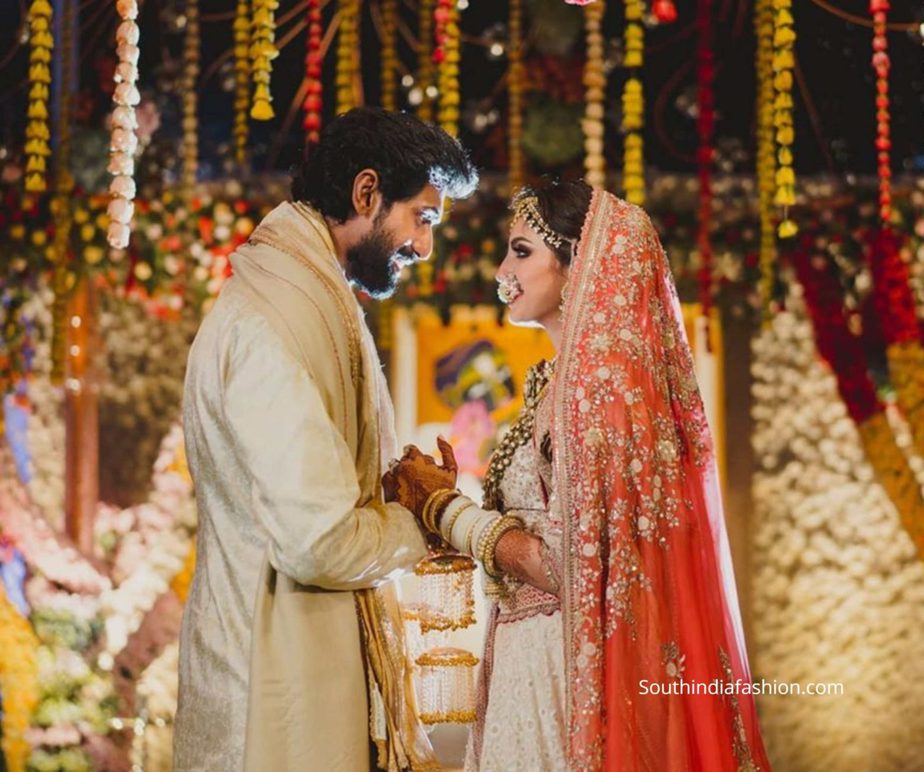 The wedding flow was planned perfectly honoring both North and South Indian traditions from fire pheras to Gauri puja. There were a total of 30 guests and each of them received a personal thank you note from Miheeka. 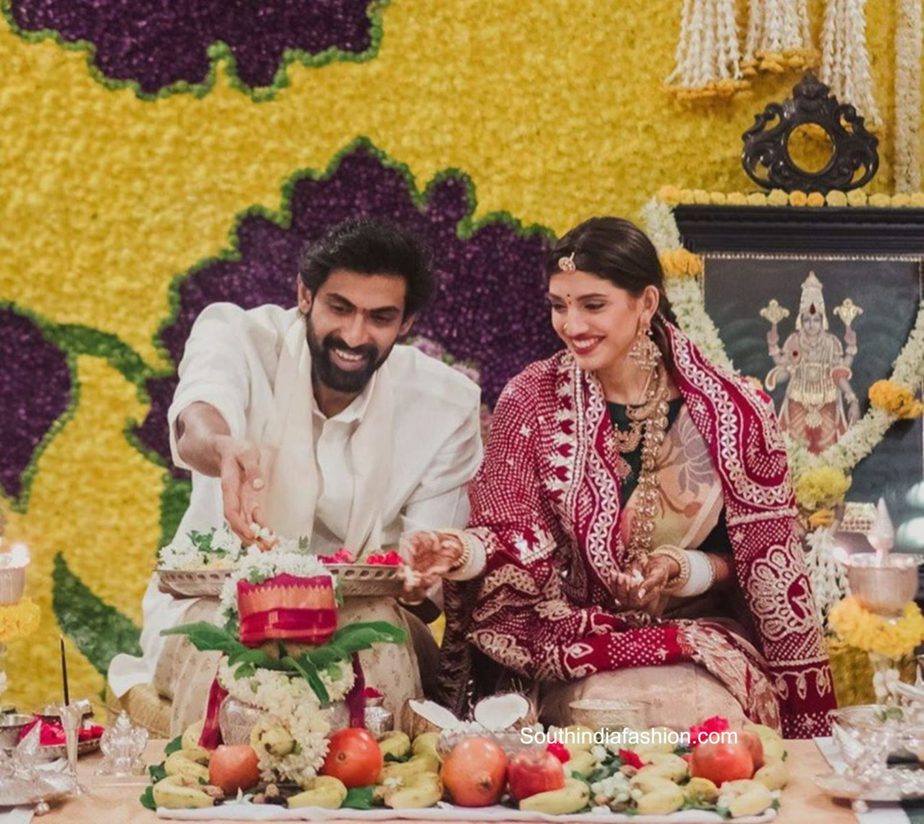 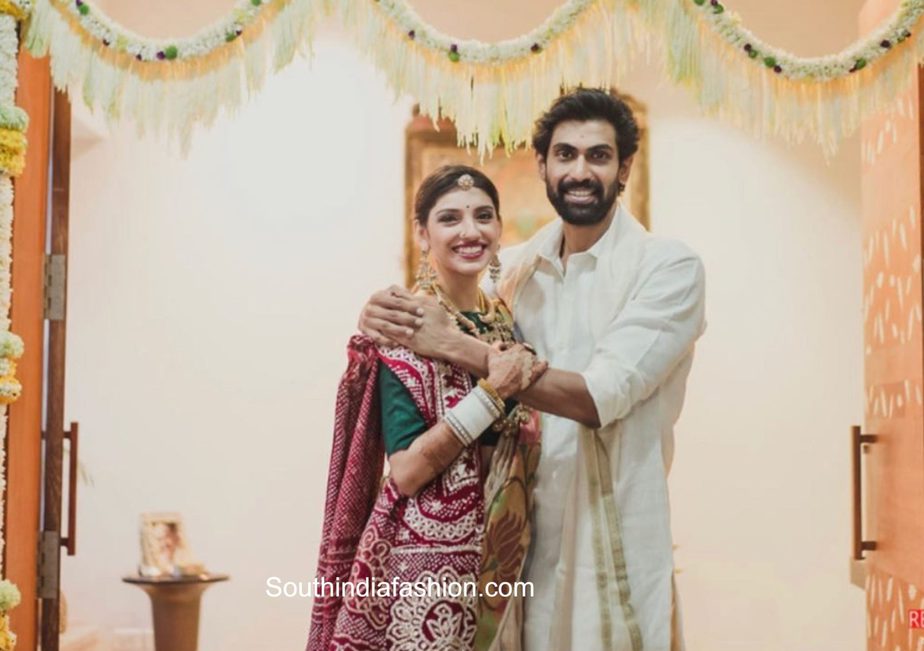 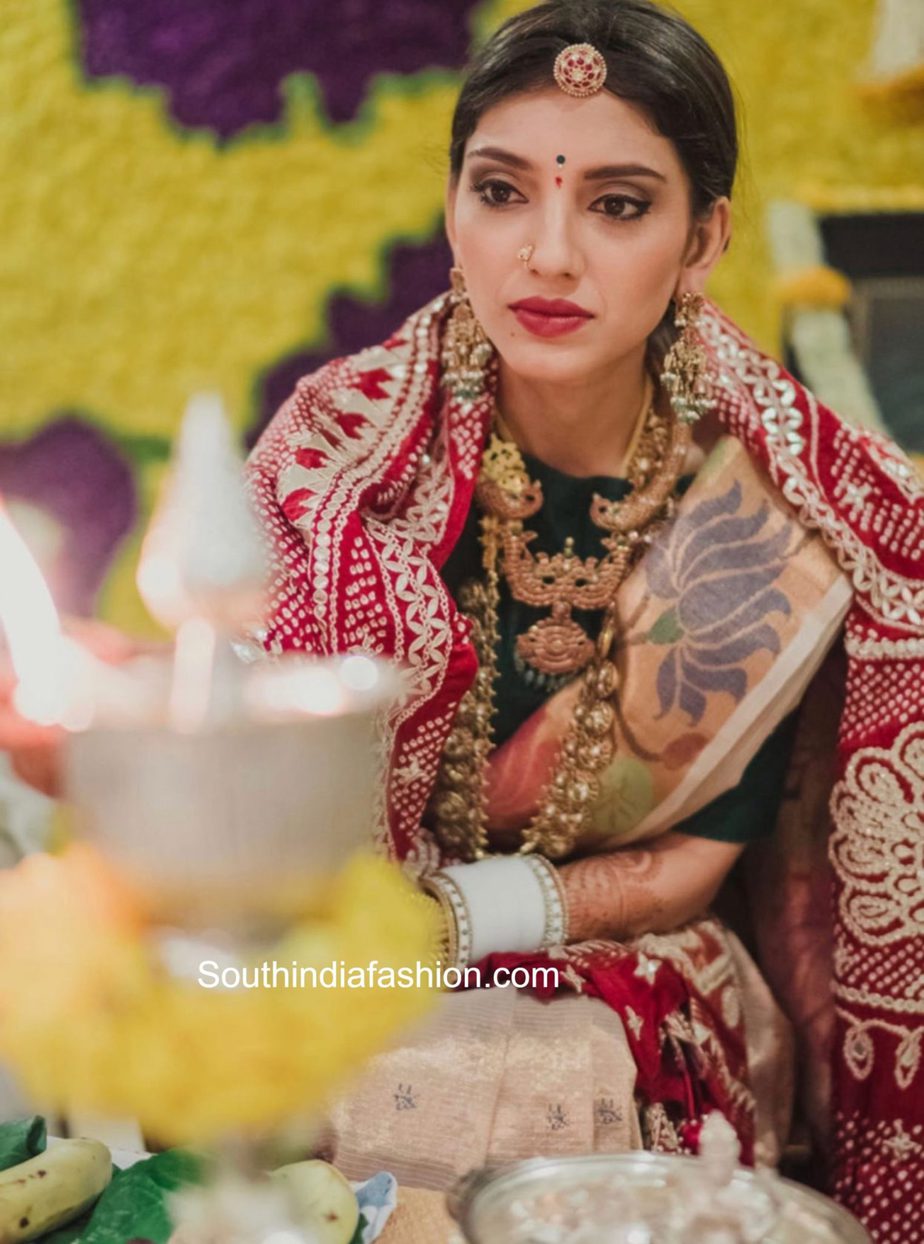 The newlyweds were seen radiating glow in the pictures that appeared from the Satyanarayan Puja. The couple performing puja along with pictures of the entire family went viral. While Rana was spotted in a white shirt and mundu shawl, Miheeka looked divine in green and gold handloom saree paired with a heavy red dupatta. The golden jewellery and white bangles set just the right tone for the overall outfit. 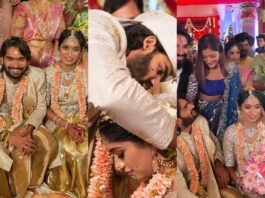 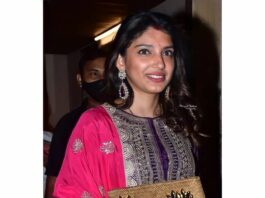 Miheeka Bajaj in a purple salwar suit for Karwa Chauth! 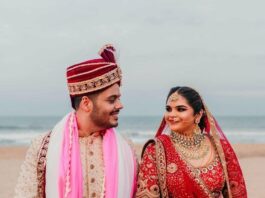 Inside photos from Vidyu Raman and Sanjay’s wedding celebrations! 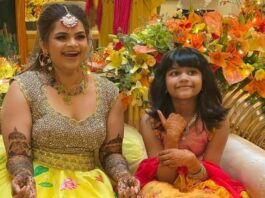 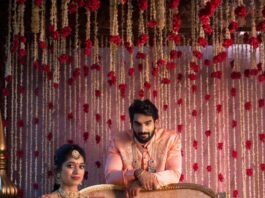 Check out the first pictures from Kartikeya Gummakonda and Lohitha Reddy’s... 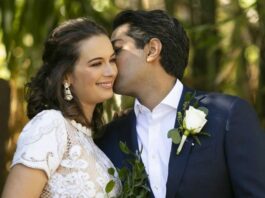